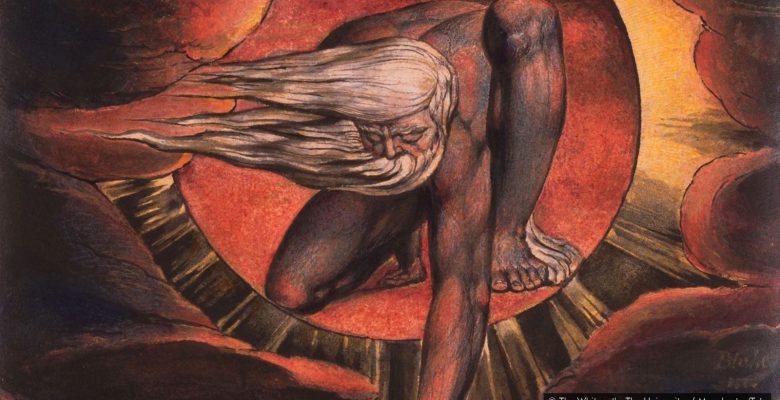 A champion of the imagination, William Blake is celebrated in a new retrospective at London’s Tate Britain. Kelly Grovier looks at how the painter and poet helped us “dream outside the sphere”.T

The Romantic painter and poet William Blake created some of the most iconic images in British cultural history – from a strange sidelong portrait of Isaac Newton, bent over naked at the bottom of the ocean, to an ebullient young boy flinging his arms out wide against a prismatic burst of colour to embrace a new dawn of human freedom. Not bad for an artist who was all but ignored in his lifetime, dismissed by many who knew him as insane, and died in poverty and obscurity in 1827. 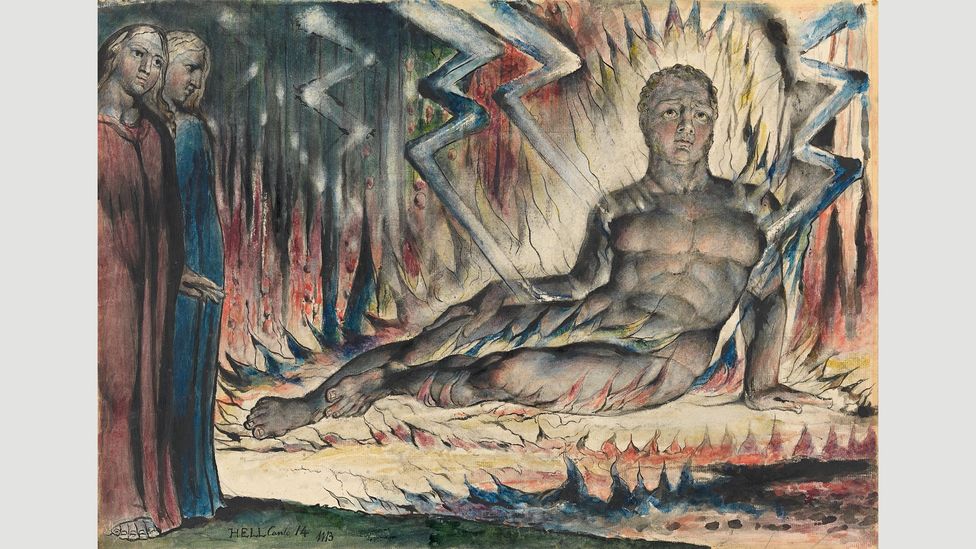 Capaneus the Blasphemer, 1824-7: The mythological figure – killed by a thunderbolt for defying Jupiter – was described in Dante’s Inferno as seemingly unaffected by the flames

Beset since childhood by visions of angels and demons who peered through his windows and accosted him in stairwells, Blake spent his years writing riddling prophecies that few read and producing watercolours that fewer wanted to buy. After decades of unheralded toil, he managed to organise only a single solo exhibition of his work. By all accounts, it was a disaster.

More like this:
– The artist revealing our ghosts
– A brutal death in New York’s art world
– The ultimate painter of war?

“The problem with Blake,” the late Romantic scholar Jonathan Wordsworth once told me, “is he couldn’t draw”. Anyone who has ever cringed at the naive and toothless tabby that sulks beneath ‘fearful symmetry’, the ferocious final phrase of Blake’s poem The Tyger in his 1794 collection Songs of Innocence and Experience, will have a certain sympathy with Wordsworth’s uncharitable jab. And yet, despite Blake’s occasional awkwardness as a draughtsman, his work is a case study in soulfulness over finesse, profundity over proficiency. 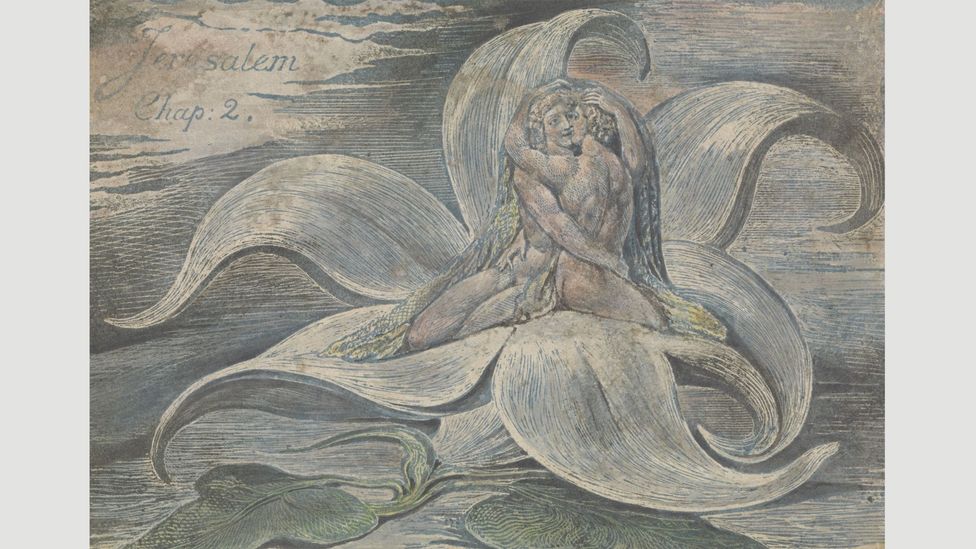 Jerusalem, 1820: Blake’s poem has become England’s unofficial national anthem, but it called for revolt, its author a fan of the French Revolution – in 1803 arrested for treason

Confident that the full significance of his work would one day be appreciated by posterity, Blake consoled himself that, rather than appealing to the blunt sensibilities of his day, he was ahead of his time and “laboured upwards to futurity”. He was right. In the two centuries since he passed away, singing sweetly on his deathbed of what he saw in Heaven, Blake has overcome every limitation of circumscribed skill and contemporary disfavour that hindered him. He has become, according to Martin Myrone, the lead curator of a new exhibition of Blake’s work at Tate Britain, the very “model of the autonomous genius and isolated visionary”.

Tate’s comprehensive retrospective, its first in nearly a generation, features more than 300 drawings, paintings, watercolours, woodcuts, and illustrated books, and provides the perfect opportunity to explore the secrets behind Blake’s ever-evolving legacy and to contemplate the emergence in popular imagination of a London eccentric whose ambition was to help us “see a World in a Grain of Sand / And a Heaven in a Wild Flower”, to “hold Infinity in the palm of [our] hand / And Eternity in an hour”. 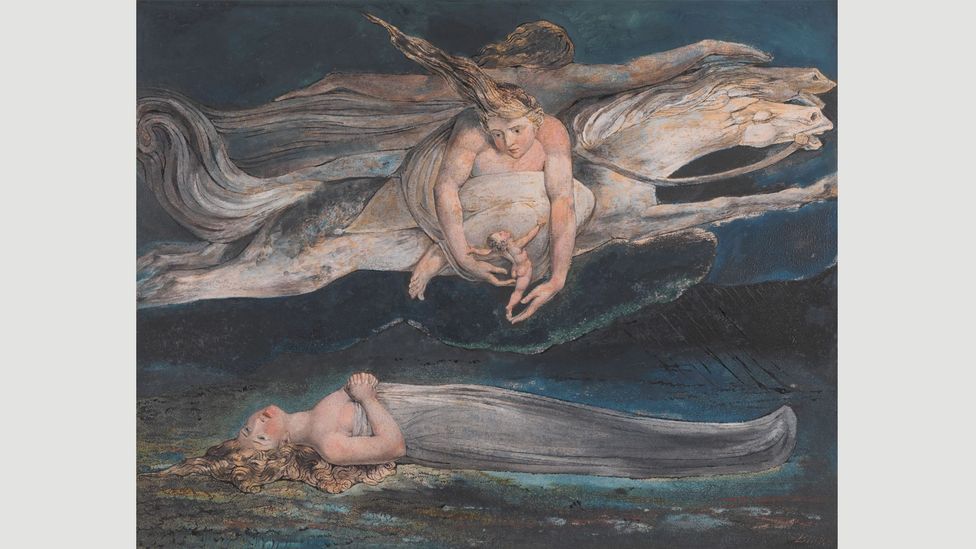 Pity, 1795: “In my brain are studies … filled with books and pictures of old which I wrote and painted … and those works are the delight and study of archangels,” wrote Blake

Blake’s ability, granularly, to narrow his focus to a single speck of the material world and to perceive eternal poignancies in it, is instructive for how best to appreciate the intensities and achievement of his own work. Visitors to the show, Myrone says, may be surprised by the small scale of many of the artist’s best-known works, which we are accustomed to experiencing artificially exploded into dorm-room posters or shrunk down to electronic thumbnails that we hold in the palm of our hands. “You can look at every Blake you could wish to see on your phone,” he tells me, “but it isn’t the same thing as seeing them in the flesh.”

There is something about zooming in that enlarges one’s perception

There is indeed something about zooming in that enlarges one’s perception. It is only when we adjust our eyes to the small (46 x 60 cm) aperture through which Blake invites us to glimpse his submarine sighting of Newton that we appreciate the cramped and claustrophobic tensions that squeeze the work into meaning. Perched uncomfortably on a coral-encrusted stone shelf in what appears to be an underwater grotto, Newton stretches awkwardly to doodle on a scroll of parchment that he has unfurled at his feet – an awkward ergonomics that makes Rodin’s rocky Thinker look positively cosy. Newton’s imperturbable gaze and the precise positioning of his spindly fingers suggest he is on the verge of a cognitive breakthrough, as if he has cracked the code that will unlock the mysteries of the universe: an emblem, surely, of the invincible power of the human mind amid the myriad discomforts and pressures of our world. 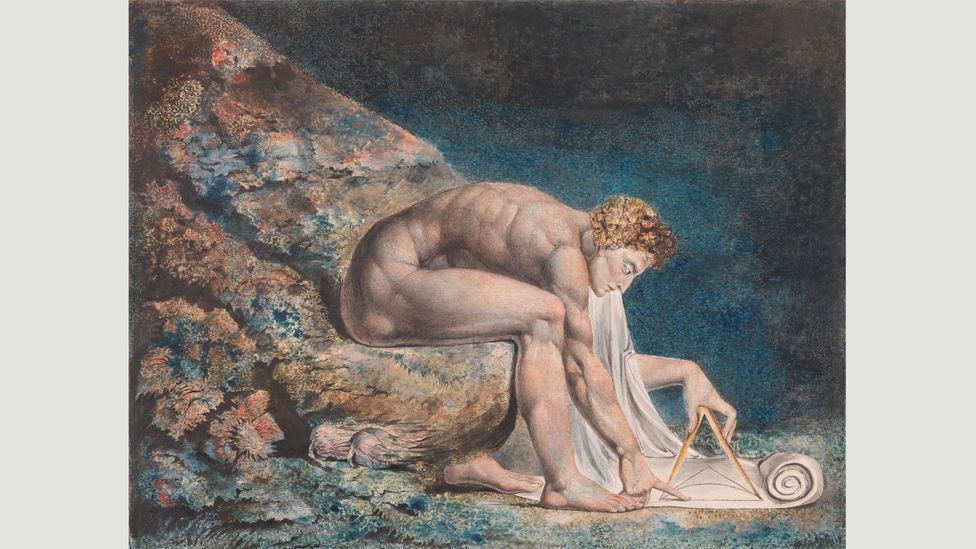 Newton, 1795-1805: Blake was a staunch defender of the fundamental role of art in society and the importance of artistic freedom

Or is it? Look closer, and the instrument with which Blake has calculatingly equipped the renowned English physicist and mathematician is one we’ll encounter time and again in the most famous of Blake’s works: a pair of draughtsman’s compasses. In Blake’s unique visual vocabulary, the implement is shorthand for the pinching tight of human perception and becomes a kind of “mind forg’d manacle” that enslaves our vision.

Far from celebrating the genius of Newton, Blake’s often-reproduced colour print is really an admonishment of misguided faith in scientific reason

Far from celebrating the genius of Newton, a leading thinker of the scientific revolution, Blake’s often-reproduced colour print (which the Scottish sculptor Eduardo Paolozzi famously alchemised into a hulking bronze statue that guards the entrance to the British Library) is really an admonishment of lumbering rationality and misguided faith in scientific reason over what Blake believed were the more profound and liberating powers of the imagination.

Once spotted, the pair of compasses becomes, ironically, a kind of key that picks open the doors of Blake’s own perception – a recurring artistic tic whose symbolic pointedness jimmies the genius of some of his most iconic images and designs. We encounter the compasses again in Blake’s stirring design for the frontpiece of his 1794 publication Europe: A Prophecy. His so-called Ancient of Days depicts a suspended deity, enthroned in a celestial orb and surrounded by smouldering clouds, stretching downwards to jab terrestrial creation with an enormous pair of compasses. In the context of Blake’s complex mythologies, the wizened figure (whose chiselled physique recalls Michelangelo’s muscular, sky-surfing God on the ceiling frescoes of the Sistine Chapel) is the fearsome demiurge Urizen, the embodiment of empirical thinking, who is responsible for imposing limits on our existence. 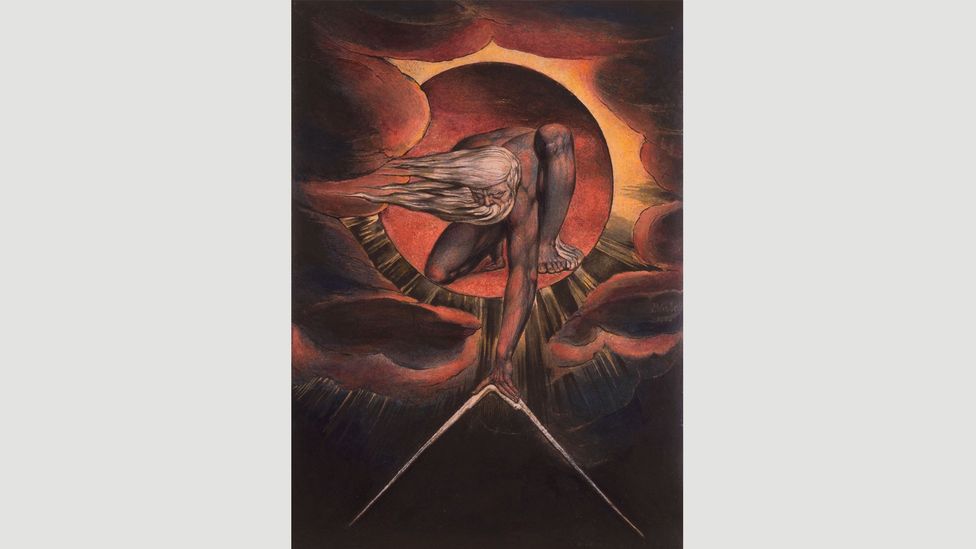 The Ancient of Days, 1827: Living at a time of political oppression, Blake was a radical, his works offering a denunciation of Church and state – inspiring subsequent generations

But like all great works of art, the mesmerising image, which Blake would return to again and again throughout his life (he was even working on a version of it while propped up with pillows at the time of his death), has prised itself loose from the narrow confines of its initial creation and etched itself in cultural consciousness as something more elastic and inspiring than merely an admonishment of reason. According to Blake, the work was a faithful transcription of a visionary encounter he’d had while climbing the stairs in his home in Hercules Road, North Lambeth, in London, where he and his wife Catherine lived throughout the 1790s. Among the chief aims of the Tate show, Myrone tells me, is to recreate something of the ambiance of those very spaces in which Blake’s imagination crept and was routinely accosted by visitors from the invisible world. 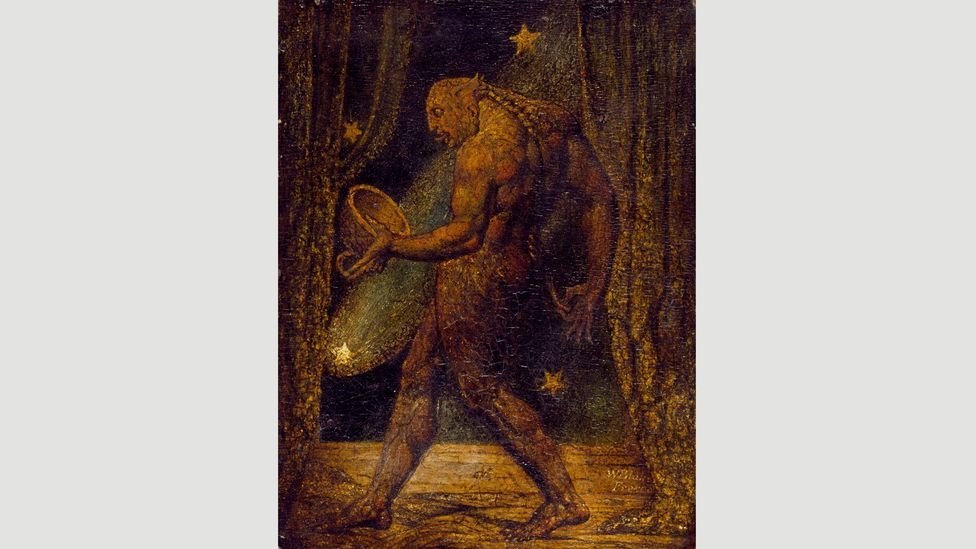 The Ghost of a Flea, c 1819-20, was inspired by a séance-induced vision – Blake broke off conversations to address the spirits of various characters, including Moses and Lucifer

To that end, the Tate has reconstructed the very room in the Georgian hosiery shop in Broad Street, Golden Square, owned by Blake’s brother James, where the artist’s ill-fated one-off exhibition was staged between May and September 1809. “Paintings which you are used to seeing in a gallery context,” Myrone says, will be shown in “a room which is half the height of our normal gallery space with creaky wooden floorboards, and with a skirting board, and with a window”. By returning Blake’s work to a space they once inhabited, Myrone believes they will “look like much stranger objects… because they are small and dark and hard to interpret and hard to read”. 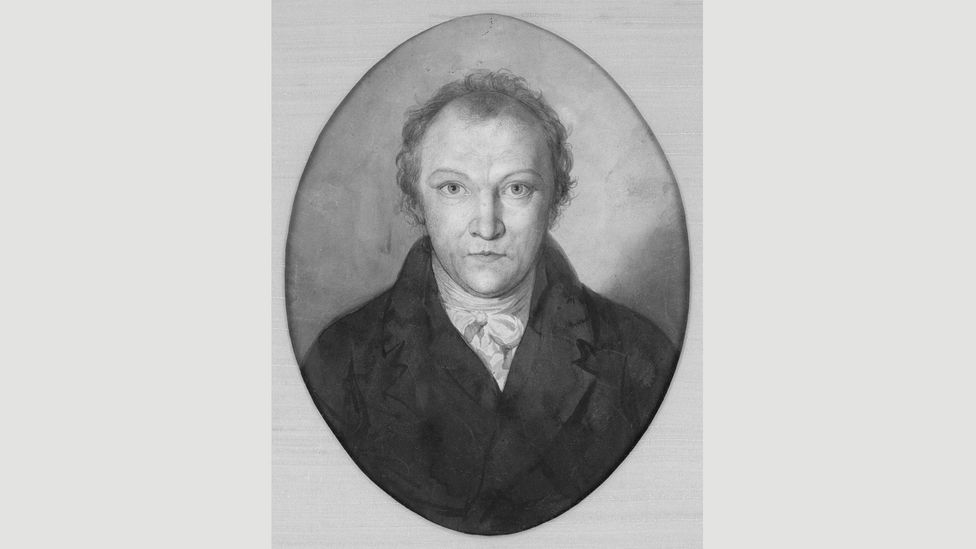 Blake suffered from a ‘Nervous Fear’; a review of his 1809 exhibition labelled him an “unfortunate lunatic whose personal inoffensiveness secures him from confinement”

By bringing Blake’s works down from the mythic eminence to which they’ve been exalted, Myrone is hoping to reintroduce the artist to a new generation of gallery goers and “to present”, as the curator explains in the handsome catalogue that accompanies the show, “a ‘Blake for all’”. “The approach taken here,” Myrone writes, “is determinedly historicist and materialist. This means, simply, that we think that it really matters where and when these artworks were created, who got to see them and what they seem to have thought, who collected them. This means, among other things, shifting attention from the epic and dense poetry to the watercolours and paintings.”

By inviting us to consider first and foremost the visual achievement of Blake’s artistic inventions, disentangled from the poetic context that often occasioned them, Myrone hopes to reprioritise how we perceive his contribution to cultural history. “There has been a shift towards thinking about the visual aspects of his work much more,” he says. “Obviously Blake is both a painter and a poet and that interplay has always been important. [But] even literary scholars have ended up saying ‘well Blake was primarily a watercolour painter, he is secondarily a poet’… Throughout his career, throughout his life, he focused on watercolour painting.” 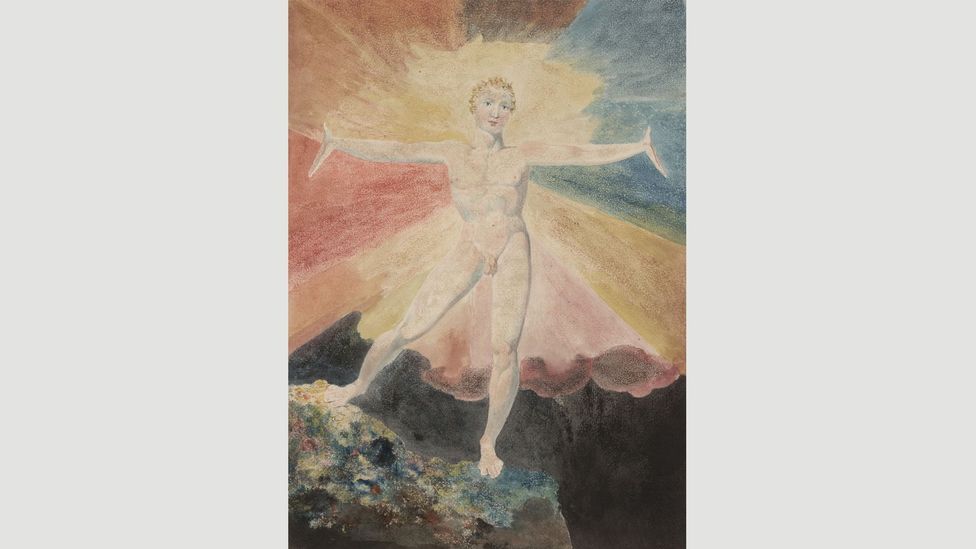 Albion Rose, c 1793, was a visualisation of the mythical founding of Britain, offering an alternative to the commercialisation and populism of the times

That realignment influences how we approach and respond to the works on display, especially those we think we know, such as the often-reproduced colour print known as Albion Rose or Glad Day, whose exuberance adorns a vast inventory of upbeat museum merchandise. By removing the intimidating expectation that we must first locate the giddy figure within Blake’s cosmologies and convoluted creation myth of his writing, we’re able to see the image afresh and in an outward-extending dialogue with other icons of art history.

Freed from the tethers of its own inception, the work opens a conversation with its most obvious precursor, Leonardo’s Vitruvian Man, which celebrates the exquisite proportions of the human body by illustrating the Roman architect Vitruvius’s observation that the anatomical extent of man conforms to a circle created by “a pair of compasses centred at his navel”. But Blake refuses to be trapped by the geometries of a fallen world and dissolves the fetters of the offending compasses by erasing altogether the circle (and square) with which Leonardo ensnares his subject, allowing the young boy to step out unshackled into a limitless world. Always original, always breaking free, Blake’s truest genius lies in his ability to help us dream outside the sphere.

William Blake is at Tate Britain until 2 February 2020.