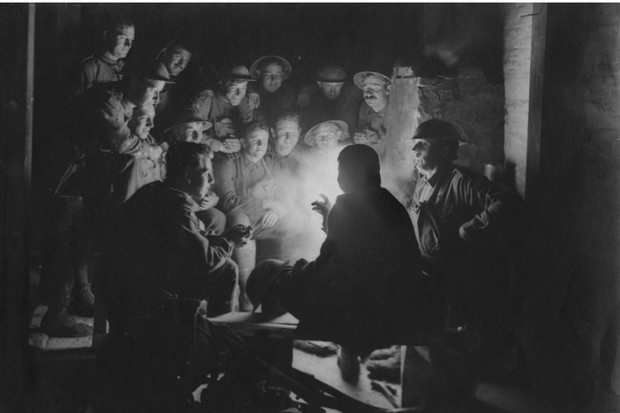 Banter, camaraderie and a satirical sense of humour helped make life bearable for the everyday Tommy in the trenches during the First World War. But, as BBC Antiques Roadshow presenter Martin Pegler explains, we unknowingly continue to use much of this World War One slang today…

In Soldiers’ Songs and Slang of the Great War, Pegler reveals how common words and phrases such as ‘bumf’ and ‘having a chat’ originated in the trenches. Drawing on his interviews with a number of First World War veterans conducted in the 1980s, he recalls how the men were overwhelmingly positive about their experiences – they made friends for life, and the camaraderie they shared was something that many never experienced again.

Here, writing for History Extra, Pegler details 10 words and phrases circulated during the war that still remain in use today:

A commonplace expression today that owes its origin to that most pernicious of insects, the louse. Body lice were endemic in the trenches, and they inhabited the seams and pleats of clothing where they bred in huge numbers, causing skin rashes and itching.

The expression is often ascribed to the Hindi word for a parasite, ‘chatt’, but is more possibly from an earlier medieval English word for idle gossip, ‘chateren’. Soldiers in the Napoleonic Wars certainly referred to lice as ‘chats’. During the Great War it was common to see small groups sitting around and talking as they used their fingernails, or a candle, to kill the lice. Such groups were described as men who were ‘chatting’.

The now almost universal word for a bottle of wine. The British soldier has traditionally failed since time immemorial to master the pronunciation of even the simplest foreign words, and it is merely a corruption of the French ‘vin blanc’.
3

Prior to the war some small defensive military fortifications had been constructed, generally referred to as blockhouses. Mostly these were made of heavy timber – many were constructed during the Boer War.

However, the term was only widely adopted into English during the latter part of the Great War because of the huge numbers of concrete bunkers constructed by the Germans across the flooded Flanders battlefields. They were called pillboxes due to their similarity to the small receptacles used by civilians for carrying medication.
4

The origin of this now very British word is shrouded in mystery. It may have come from the Arabic ‘beladi’, meaning ‘my own country’, or the Hindi word ‘bilaik’, referring to a foreign place or country. For the Tommies, it meant only one thing: home.

The best possible way to get there was to sustain a wound serious enough to require hospitalisation in England, which was enviously termed ‘a Blighty one’.

Editor’s note from The English Cube : We would like to insert a small edit here , based on a reader’s observation and further investigation, ” the Hindi word for foreign is “bilait”.

A superstition that it was bad luck to light a third cigarette from the same match. This was actually based on sound experience: it took a German sniper about five seconds at night to see, aim and fire at a light source, and a flaring match was clearly visible on a dark night from well over 500 yards. Five seconds was also about the time it took for the third man to light up.
6

The first modern armoured fighting vehicles were produced in great secrecy by Fosters of Lincoln. To prevent any hint of their purpose being discovered by German spies, workers were told they were mobile water tanks. Some were even clearly marked in Cyrillic ‘Water tanks for Russia’. The ruse certainly worked, because their first use on the Somme on 15 September 1916 was a complete surprise to the Germans.
7

Prior to the First World War, armies had employed specialist marksmen known as ‘sharpshooters’, but when war broke out the Germans fielded thousands of highly trained riflemen, usually equipped with telescopic-sighted rifles. British officers referred to them as ‘snipers’, which harked back to the army in India in the late 18th century when officers would go bird hunting in the hills – the tiny Snipe being one of the hardest of targets to hit.

From 1914 the word was widely adopted by the British press, and it has since become universal. Sniping can now also refer to sharp or snide remarks made about another person.
8

An example of an expression that has seen a resurgence, although now with a very different meaning. Originally it referred to the physical act of launching an attack by climbing over the sandbag parapet in front of a trench – literally by going over the top. It thus became synonymous with setting off on any highly dangerous venture, usually with a slim chance of survival.

It mostly died out after the war but in recent years has been revived, albeit now meaning to embark on a course of action or to make a remark that is either excessive or unnecessary.

Often used today as a reference to the annoying, and all-but-worthless small change that accumulates in one’s pockets or purse. It is possibly the most incorrectly used word from the war, as it is invariably misapplied to describe the lethal flying splinters from high-explosive shells.

In fact, it refers to the lead balls launched from airburst shells (a little like airborne shotgun cartridges) invented by Lt Henry Shrapnel of the Royal Artillery in 1784.
10

Printed paper that is produced in huge quantities for no discernable reason, and apparently has no information value.  The junk mail we all receive on a daily basis is a prime example.

It is derived from the army term ‘bum-fodder’ – paper that has only one possible practical use. It is originally from prewar schoolboy slang then appropriated by the soldiers to refer to excessive paperwork. It generally referred to the endless streams of army orders that were issued from headquarters.

In the middle of one particularly savage attack on the Somme, a British orderly officer received a series of communiqués from HQ demanding to know how much tinned jam was held in stores and how many pairs of socks were required. Some things never change.

This article was first published by History Extra in August 2014.

Someone or something that is pleasant or attractive.

1.What a charming village!

The English Cube
4.9
Based on 18 reviews

Rihana Antapur
04:32 11 Nov 19
Thanks to "The English cube" for great experience on the courses of basic english speaking. All instructors are really... good especially Angelika Shankar and Swetha. Thanks again.read more

Mohammed Taha
09:40 18 Aug 19
I studied my beginner level English with trainer Angelicka Shankar. I was extremely clear about concepts with her... teaching. I then took Intermediate level also. My classes with my trainer were very interesting, interactive. Would always look forward to studying with her. Thanksread more

Roopa Thirumalai
15:50 21 Jul 19
Competency and fluency in the English language is a challenge for many. The working world looks for these important... skill sets while recruiting and also most people long to have it simply to scale up the ladder! If you are one of those, choose to do a course with The English Cube. You will surely find the learning experience interesting and fulfilling. As one of the trainers with The English Cube, I would like to say that we create blended learning experiences that help you to learn and use the language skills in your chosen field more effectively and appropriately! Join us to explore the interesting intricacies of the English language!!!read more

CHANDRAMANI KUMAR
07:21 12 Jul 19
This is the best place to learn English and make your English better. Teachers are very helpful and understanding.They... teach us very politely and make it us clear. All are fully professional including staffs.I highly recommend this institute to everyone.read more

Bhavya Manohar
11:13 13 Jun 19
Impressed with the quality offered by them. If you are interested in learning from the real people who make English... learning a fun and generate interest for it in you, this is the right place. The quality of the materials, qualification of the instructors, infrastructure, audio visual classrooms are something which make this center one of the best. I joined my upper intermediate level here which is helping me in my professional life and career.read more

Balajee Subramanyam
07:24 09 Jun 19
The English Cube is a very professionally managed institution for English language. Tutors are highly qualified and... committed to their work. I liked the syllabus and their focus on communicative methodology which enables to make a person speak the language from the first day of the class. I recommend this institute to the people who are looking to learn English for interview, job, business and professional purposes.read more

Richa Kumar
02:37 26 Apr 19
I did my basic and intermediate levels here. Good teachers and admin staff who helped me learn and practice... conversation. I will come back for my next level.Thank you the English Cuberead more

Venkatesh Krishnappa
07:41 08 Apr 19
I started leaning English with this institute when I was looking for a job. I must thank the institute that I became... confident not only in my English and general communication skills but also I learnt about the etiquette, soft skills and how to be presentable in meetings, conferences and public programs. The material, training and audio-visual sessions and the classroom atmosphere made me very comfortable and now I am able to speak English well. Thanks to my trainers, I definitely recommend it to any one who wants to learn English for professional purposes.read more

sari0007 sharma
08:54 30 Jan 19
Hi, before joining this job, I was searching a job. I didn’t get a job because I had lack of communication issues in... English. Once I joined & learned communication from you, after that I used my communication skills in the interviews. I got a job. I believed myself because of that I joined your classes. Now I am filled with sound vocabularies, Grammar, Email ethics, corporate ethics & Etiquette, able to give well formed group discussion, pronunciation and so on. She has immense knowledge on all the topics. Now I have Everest confidence to survive in this competitive world. I would recommend this course to people who have lack of confidence and who want to make an impression by communicating well and move up the corporate ladder. I am thankful to Shweta and recommend her classes to everyone, who is looking for all-round development in their personality and communication skills. Thanksread more

Manjunath Sheshadri
12:21 09 Jan 19
A good place to learn English for professional and academic purposes. Thanks to the qualified teachers who make English... learning easy and fun.read more
Next Reviews

The English Cube
4.6
Based on 8 reviews

Vishwajeet Kumar
07:57 02 Sep 19
It is good institute for spoken english

vatsalavani dr
06:49 02 Jul 19
It's a good institute which helped me to improve my English.
Next Reviews

THE ENGLISH CUBE
4.8
Based on 8 reviews

Ishita Mallik
08:54 15 Jun 19
One of the best institute for learning English. The teachers are very helpful. The study materials are also very high... stander. I have really learned a lot .read more

Pushkar Shankar
18:28 27 May 19
Good institute for developing your language skills.

Sanskriti Saha
12:02 27 May 19
Excellent institute for English and personality development.