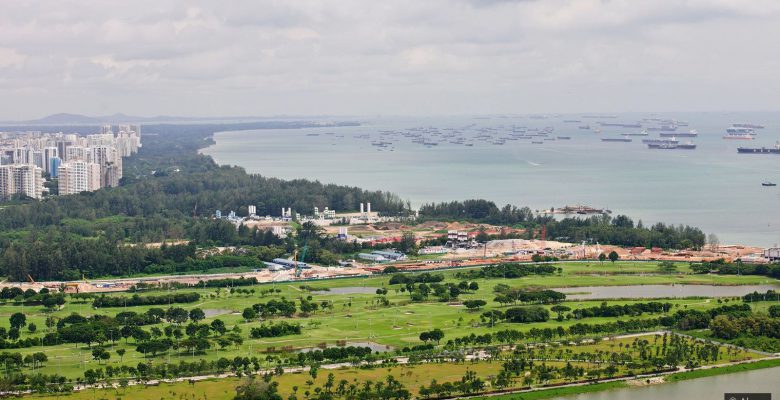 Most of Singapore’s population speak the unofficial language or dialect known as Singlish. But why would the government rather it went away? James Harbeck takes a look.J

Jerlyne Ong, a Singaporean now living in Canada, sends a message to a friend back home: “Cannot imagine sia. In Singapore, you strike, you lose your job. But ya, the postal service stopped liao. Cannot agree, buay song, so liddat lor. No postal service for now. Also dunno how long some more. So pek chek.”

Is that English or not? Most of Singapore’s 6 million people speak it, but they don’t agree either. What they do agree is that it’s Singlish. Singlish is the unofficial language – or dialect? or slang? – of Singapore, born out of the contact between the several cultures that make up the city state. It’s a living example of how languages can change and develop. It is also an expression of the Singaporean character and culture, a national treasure – or a detriment and danger to the country, depending on whom you ask. 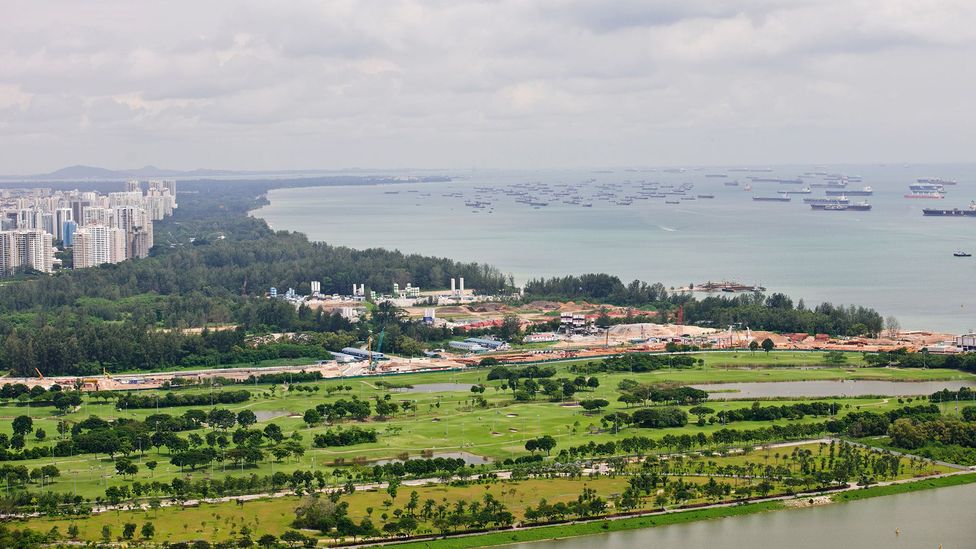 Singapore is a city-sized island at the southern tip of the Malay Peninsula, originally populated by Malays (Credit: Alamy)

Singapore is a small island at the southern tip of the Malay Peninsula, and it was originally populated by Malays. After a British trading post was established there in 1819, many of the traders who arrived were from different Chinese ethnicities: Hokkien, Cantonese, Teochew, Hakka, Hainanese. Some also came from India and Sri Lanka, especially Tamils. By the early 20th Century, there was a pidgin used in trading, but it wasn’t based on English or Chinese – it was called Bazaar Malay.

Education was not universal; the better-off families paid to send their children to English-speaking schools to advance their career prospects, and it was in this context that the seeds of Singlish were sown. Singlish didn’t show up first as a pidgin, a lingua franca used in trade. It came about as an adapted version of English used by students in English-language schools who spoke other languages at home. Which means that from the beginning, it had the air of ‘not-quite-right’ English, a version that the students knew wasn’t ‘proper’ – but was functional and had more cultural connection for them.

After World War Two, universal free education was instituted in Singapore, and starting in the 1960s it was provided on an ‘English plus mother tongue’ basis: the students would take their classes in English, plus a class in one of the three mother tongues of Singapore – Malay, Tamil, and Chinese (‘Chinese’ in this case meaning not Hokkien or Cantonese but Mandarin: the most prestigious kind, and the most useful for business). 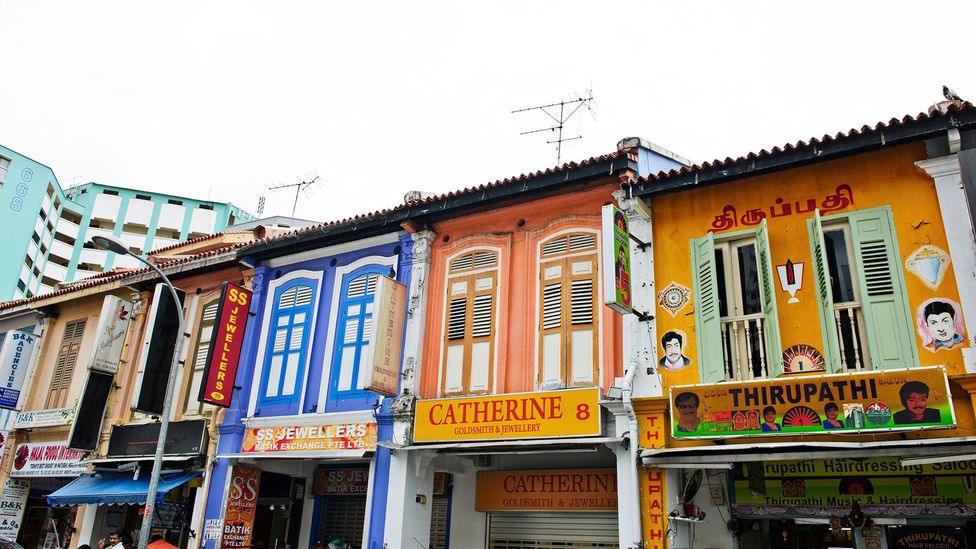 The population of Singapore today is more than 75% Chinese, about 15% Malay and about 8% Indian (mainly Tamil) (Credit: Alamy)

The schools were the soil in which Singlish sprouted, and it has now spread through all of everyday life. The population of Singapore today is more than 75% Chinese, about 15% Malay, about 8% ‘Indian’ (mainly Tamil), and roughly 2% other origins, but about half of the population now speak English (or Singlish) at home. And Singlish is the neutral language between members of different ethnic groups. It is undeniably a central expression of Singaporean culture, vibrant, loaded with references from the cultural backgrounds of Singaporeans. And it is still thought of by many Singaporeans as ‘bad English’ even as they use it themselves.

This video is no longer available

All syllables have approximately equal length and stress. It sounds almost like a tone language in places. Some sounds are changed, and consonants at the ends of words are often dropped or reduced – “like that” becomes liddat. Conjugational and plural endings often disappear. There are quite a few loanwords, such as kena, ‘get something bad’; kiasu, ‘fear of losing out’; shiok, ‘very good’; sian, ‘boring’; buay song, ‘not happy’; pek chek, ‘annoyed, frustrated’; and sia, which is used as an emphatic rather as we might use ‘man’.

If someone suggests an activity to which you are not inclined, just say ‘Don’t want lah’

Singlish may seem like heavily accented, grammatically sloppy English, but it has its own coherent, systematic grammar with strong influence from Chinese. Word order is often based more on Mandarin than on English. Anne Dellos says she might say to a taxi driver, “Uncle, you go stun ah. Street too small, tun-roun can not.” (“Go stun”? Go astern; back up.) 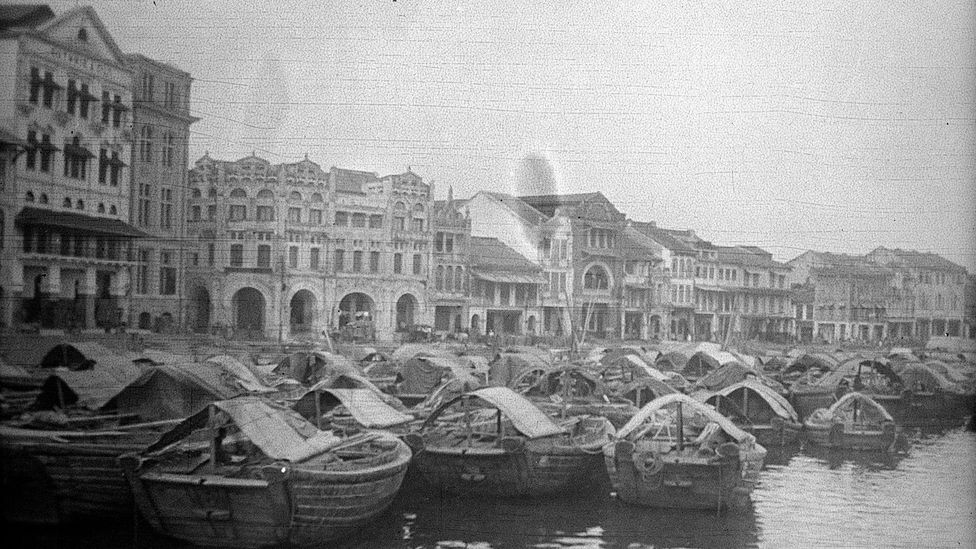 After a British trading post was established there in 1819, many of the traders who arrived were from Chinesa, India and Sri Lanka (Credit: Alamy)

Words are often left out where they can be assumed, especially pronouns; on the other hand, words may be repeated for emphasis. “Can help me do dis?” “Can, can, confirm can.” The net effect can sound hurried, impatient, or even rude to British ears, but, as Jerlyne Ong points out, “Some people can argue that Singlish is better than English because it’s more efficient.” If someone suggests an activity to which you are not inclined, just say “Don’t want lah.” This won’t, however, endear you to them if they are expecting “Yes, well, we could do that; there are a few other things that might be of interest…”

Lah is surely the most famous word in Singlish, and is emblematic of a whole class of words that set Singlish apart: pragmatic particles – a kind of verbal equivalent of an emoji. These words inserted at the ends of sentences are mostly borrowed from other languages (especially Chinese dialects), and they have to be said with the right tone, as if in Chinese. Lor (mid-level tone) expresses resignation (So liddat lor, “It’s just like that, what can you do?”); meh (high tone) expresses a proposition in need of confirmation (Cannot meh, “You really can’t?”); liao (low falling-rising) indicates a completed action (The postal service stopped liao). Even wut – which is to say, what – when said with a low falling tone at the end of a sentence expresses objection (if you are asked to buy something you have already bought, you might say Got already wut). And lah? It can be said with different tones to express different things; quite a bit of linguistic analysis has been done of just what it means – Jock Wong of the Australian National University has done a study teasing apart its different uses, which he boils down to “impositional”, “propositional”, and “persuasive”.

This all may make Singlish sound like a unified and consistent thing, however, and it is not. Although a lighthearted dictionary has been put together for it – the Coxford Singlish Dictionary, by the website TalkingCock.com (there is also a web dictionary of Singlish) – it is not standardised. Even the spelling is not agreed on. It is used differently at different times according to the context and who’s in the conversation. At its most fully realised, it is effectively a different language that uses a lot of English words. At its closest to standard English, it may differ just in pronunciation, use of the pragmatic particles, and a few loan words. 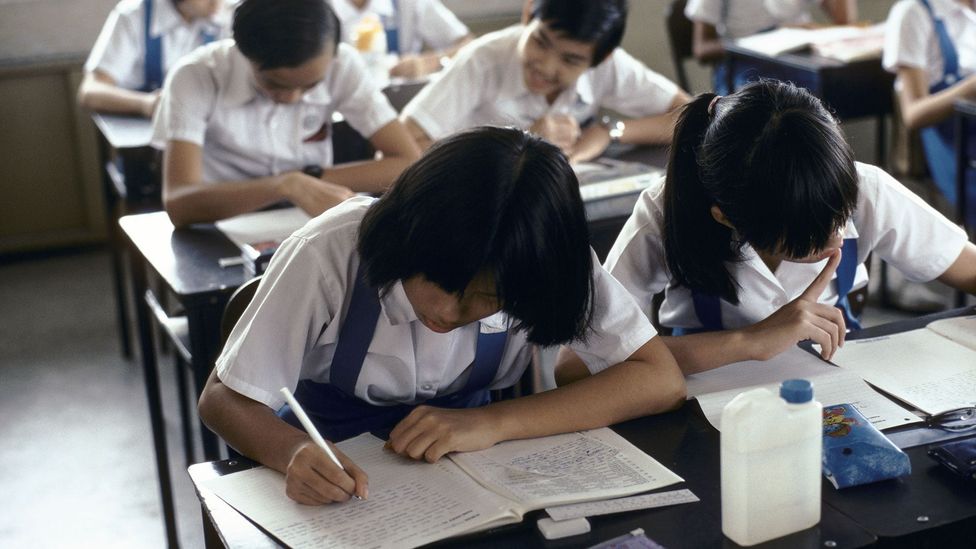 The schools were the soil in which Singlish sprouted, and it has now spread through all of everyday life (Credit: Alamy)

And this is part of the problem: Singlish speakers, rather than switching to and from standard English, glide towards and away from it, stylistically. Many people are concerned that Singlish speakers may not be aware that they’re not speaking an English other people can understand. They want the schools to do a better job of inculcating ‘good’ English – the irony being that it’s in the schools that Singlish arose.

If they speak Singlish when they can speak good English, they are doing a disservice to Singapore – Goh Chok Tong

In 2007, Rani Rubdy of Singapore’s National Institute of Education found that although most primary school students spoke Singlish in informal contexts, nearly all of them agreed that it was best to learn ‘good English’. They also said they always wrote in ‘good English’ – but it turned out that while they did not use Singlish turns of phrase and pragmatic particles, many of them did drop conjugational endings, plural markers, and prepositions. Like primary students elsewhere, they value ‘good English’ a bit more than they use it, it seems. But in Singapore, this will not do: it is bad for business, they say, and for the country’s image. 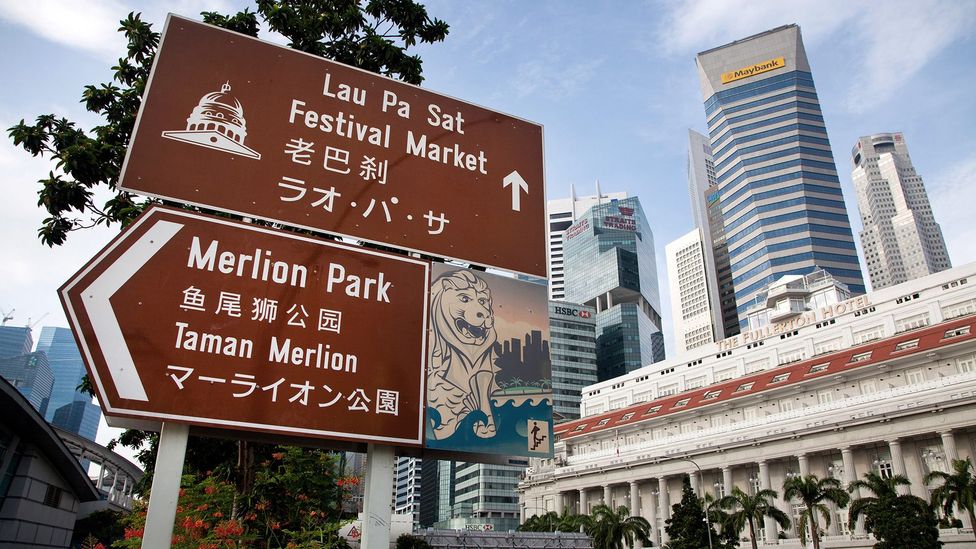 Singlish is a living example of how languages can change and develop (Credit: Alamy)

The Singaporean government did not like this. In 1999, Senior Minister Lee Kuan Yew said “The more the media makes Singlish socially acceptable, by popularising it in TV shows, the more we make people believe that they can get by with Singlish. This will be a disadvantage to the less educated half of the population.” Following on from that, in 2000, the government instituted a program called the Speak Good English Movement. It at first seemed to aim to eradicate Singlish – Goh Chok Tong, prime minister at the time, said “If they [the younger generation] speak Singlish when they can speak good English, they are doing a disservice to Singapore” – but it now seems to have backed off slightly. Its website, declares, “The Speak Good English Movement recognises the existence of Singlish as a cultural marker for many Singaporeans. We aim to help those who speak only Singlish, and those who think Singlish is English, to speak Standard English.”

Must Singlish ultimately die for Singapore to thrive? Some have said so. In 1999, Jaime Ee, in a column in The Straits Times, wrote that Singlish “became an identity thing for us, something that we created ourselves and gave us a sense of rootedness even if nobody else could understand it except us. Unfortunately, if we want to become a global economy, we have to give this up, and in a way, give up a bit of our identity.”

But is it necessarily so? Or is that conflict itself central to Singaporean culture? Four national languages and one national linguistic tension? As Wendy Bokhorst-Heng of the National Institute of Education wrote in 2005, “the tensions and the debates around Singlish do not necessarily seek resolution; rather, they themselves have become embedded in Singaporean identity and the imagining of the nation.”

Or, to quote Jerlyne Ong, “Because liddat lor.”