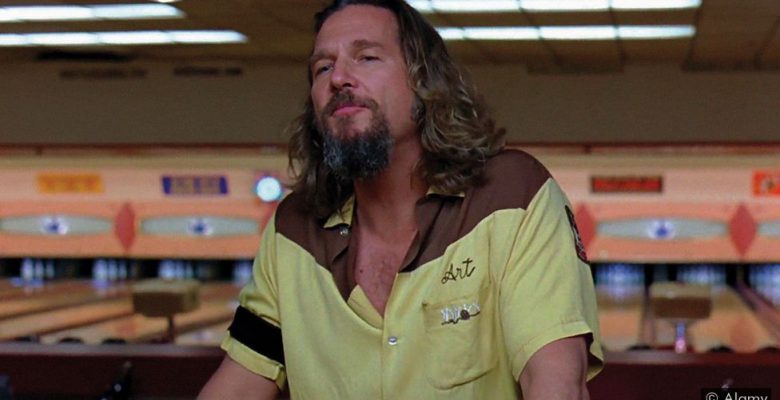 Many common terms in English have unexpected roots. Kelly Grovier explores the origins of seven words coined in art history, including the political meanings of ‘silhouette’ and ‘picturesque’, and how ‘mobile’ became ‘mob’.W

Which came first, the chicken or the Fabergé egg – the world itself, or the artistic expressions we use to see and describe it? While it is always observed with surprise when reality appears to imitate art, in fact the world of painting, drawing, and sculpture is responsible for giving us a great deal of the language with which we understand and articulate our experience of being in the universe.

Before anyone ever walked through a ‘landscape’, an artist painted one. The word itself was devised in the early 17th Century not to describe an actual out-of-doors expanse of inland terrain or a gardener’s manicuring of a natural scene. Rather, ‘landscape’ was created to denote a painterly illusion of such rural reality: the rendering in pigment on canvas of a 2D replica of hills and fields, rivers and trees – not the thing itself.

A quick glance back at the words we use every day to discuss our experience of the world reveals a hidden reliance on language hatched by art and artists. To dig deeper into the biographies of such ordinary words as ‘silhouette’, ‘panorama’ and ‘dude’ is to uncover surprising histories that change the way we understand and appreciate their resonance and ever-evolving meaning. What follows is a brief exploration of some of the more fascinating coinages of words that have long since eased their way from their artistic origins into casual conversation. 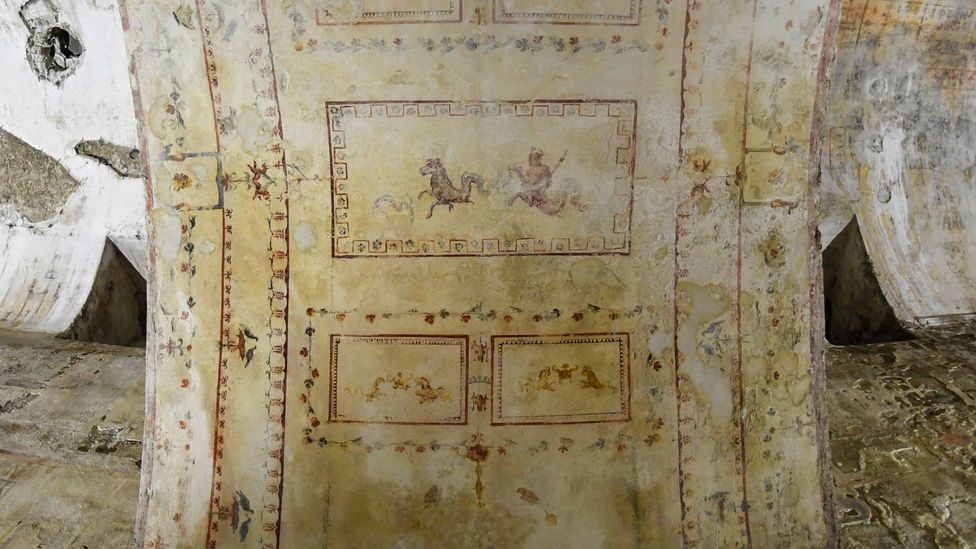 The word ‘grotesque’ refers to a space filled with wall paintings, in the Domus Aurea palace, discovered when a Roman youth fell through a fissure (Credit: Getty Images)

To the modern ear, calling something ‘grotesque’ is just a swankier way of saying it’s grim and nasty. But this particular kind of ghastly nastiness has an intriguing cultural backstory – one that plunges us deep below ground and into the time-buried rooms of a long-lost palace. It’s thought that the word ‘grotesque’ likely owes its origin to weird wall designs that were rediscovered in Rome in the early 15th Century when a young boy fell through a fissure in the city’s Esquiline Hill.

The dark chamber into which the boy collapsed was a basement of the fabled first-Century Domus Aurea – an elaborate compound built by Emperor Nero after the great fire of 64 AD. Imagine the child’s shock when he found himself surrounded by an elaborate braid of arabesque patterns into which were woven a macabre menagerie of hybrid human-beasts. The space itself was labelled a ‘grotto’ (meaning ‘cave’) for the manner in which it was accessed by the many visitors it soon attracted (including Michelangelo and Raphael), who were variously lowered down by ropes or left to crawl inside. ‘Grotto’ in turn gave birth to ‘grottesco’ (or ‘resembling a grotto’). By stripping away its sense of shadowy mystery and retaining only its hint of hideousness, our modern usage of ‘grotesque’ has muted the word’s edgy magic. 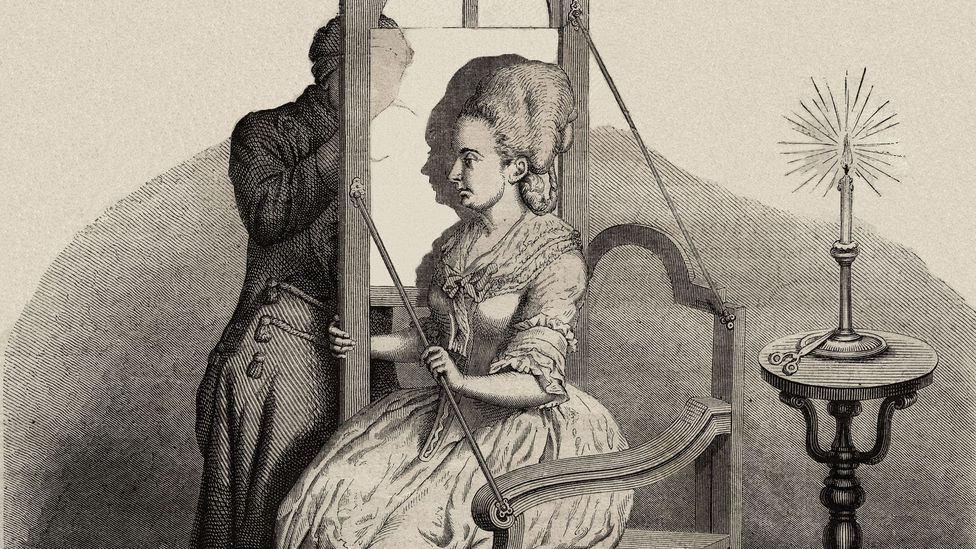 ‘Silhouette’ was coined in response to the austerity measures of a French treasury minister in the 18th Century (Credit: Getty Images)

‘Silhouette’ isn’t so much a word one says as whispers. Like a compressed one-word poem, silhouette’s syllables respire with an easy elegance that seems utterly in harmony with the exquisite simplicity of the phenomenon for which it stands: the fleeting shadow of someone cast against a white wall. That is what it means, right? In fact, the word’s origin is rather less liltingly lyrical than you might guess. It was coined in the 18th Century as a kind of sarcastic dig against the economic policies of Louis XV’s Treasury Chief, Étienne de Silhouette.

In an effort to bring France’s swelling debts under control, Silhouette proposed taxing those who displayed signs of conspicuous wealth, such as the ownership of expensive works of art. Soon, anything that smacked of extreme frugality was said to be done ‘à la Silhouette’, including the production of cheap likenesses of sitters cut out from black paper instead of more elaborately painted portraits. It wasn’t long before the nickname ‘silhouette’ stuck, the music of the word long outliving the snippy circumstances of its coinage. 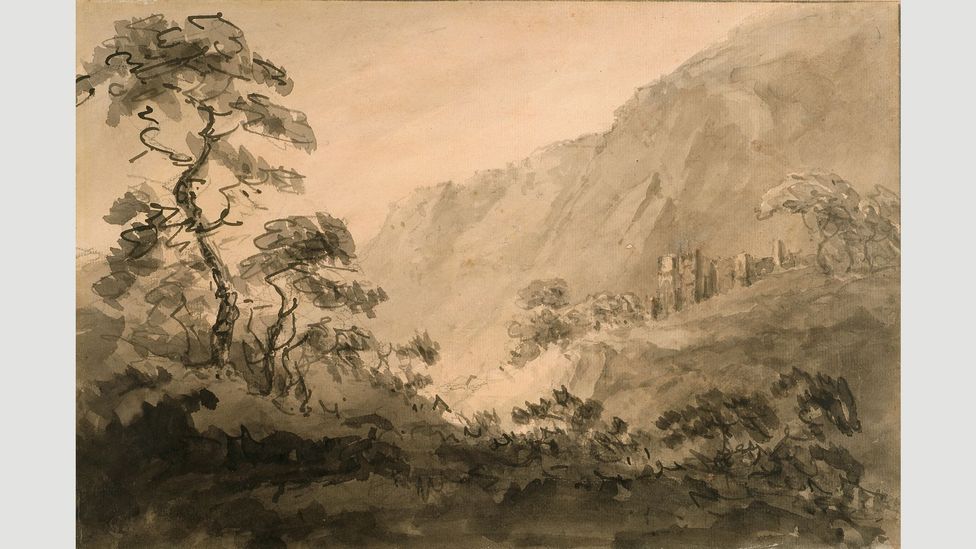 ‘Picturesque’ – such as Mountainous Landscape with Ruin by William Gilpin – could have been an artistic movement to prevent revolution spreading from France (Credit: Getty Images)

‘Picturesque’ is the word we reach for to describe the allure of a charming vista or natural scene. Surely it is a word at furthest possible remove from the realm of propaganda? In fact, it has a rather sinister political past. Derived from the Italian word ‘pittoresco’, ‘picturesque’ was seized upon at the end of the 18th Century by upper-class British artists who had been inspired by the luminous Italian landscape paintings they’d encountered while visiting the great hubs of European culture on what became known as The Grand Tour.

But the ‘picturesque’ paintings that artists such as William Gilpin began to create differed strikingly from the wide-open and liberating vistas you find in paintings by such masters of ‘pittoresco’ style as Claude Lorrain or Salvator Rosa. The winding paths and meandering rivers that lead one’s eye from the shadowy foreground in a Claude painting, to the soul-soaring horizons in his sun-soaked distance, are suddenly shut down – the liberating journey of the eye is blocked.

Some cultural critics have suggested that proponents of the British picturesque may have been motivated by fear of political revolution spreading from France to England, and so sabotaged its power in order to keep the aspirations of observers of their work in check. No wonder the US transcendentalist Ralph Waldo Emerson, who believed in the ascent of spirit, once asserted: “pictures must not be too picturesque”. 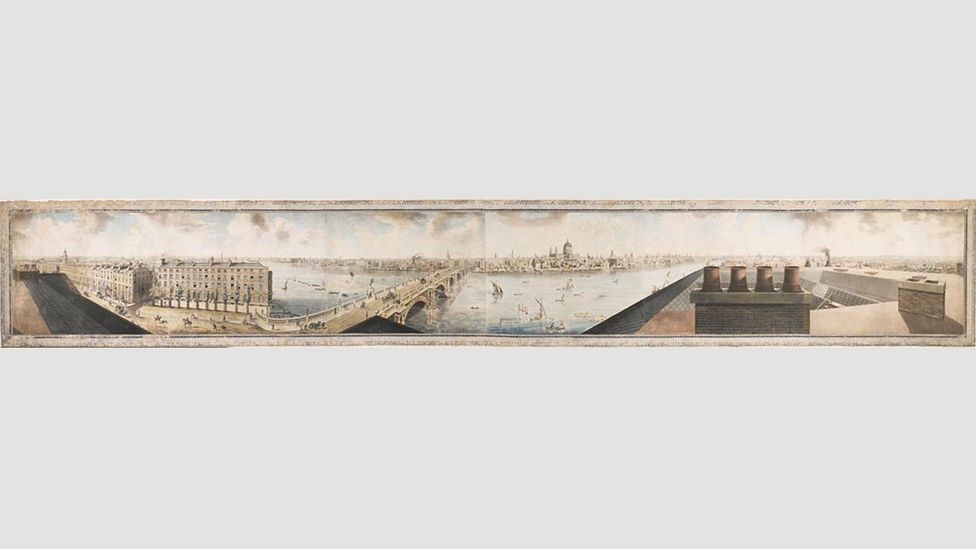 In 1789, the artist Robert Barker invented a cylindrical vista that surrounded the viewer: at first, a panorama was something that enclosed rather than a space without limits

Say the word ‘panorama’ and the whole world opens up. Its sprightly syllables launch the imagination outward as far as the soul can see into a whirling and unbroken orbit of near omniscience. A ‘panorama’ implies a vertiginous ascent and visual spin that places each one of us at the very centre of all we survey. How strange then, to discover that the word itself was in fact coined to describe an entirely indoor, cloistered and windowless experience.

The word was introduced around 1789, the year the Bastille prison fell, by the artist Robert Barker to describe a contraption for which he’d sought a patent two years earlier. The invention, modestly described in the application as ‘Apparatus for Exhibiting Pictures’, involved enveloping an observer in an enclosed, circular chamber, or rotunda, whose cylindrical walls were covered with a seamless and all-encompassing depiction of an encircling vista. A popular panorama that Barker installed in London’s Leicester Square attracted visitors for 70 years, from 1793 to 1863. The first panoramas weren’t panoramic at all, but pretty prisons. 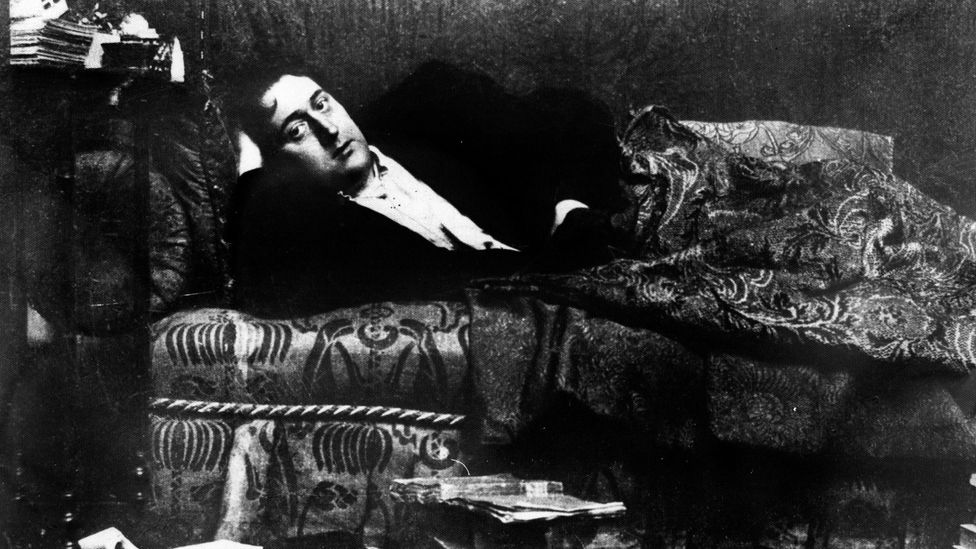 These days, anything that’s out of the ordinary is called ‘surreal’. A writer for the Washington Post this month described the trend of scriptwriters suing their own agents as a “surreal turn”. The next day, a journalist for the Hollywood Reporter characterised the press conference that the US Attorney General held before releasing the long-awaited report on Russian interference in the 2016 presidential election as a “surreal TV presser”. It wasn’t always so. The French intellectual who coined the word ‘surreal’ a century ago had rather higher hopes for his linguistic invention.

Rather than a derogatory synonym for ‘preposterous’, ‘surreal’ was intended to signify our secret access to universal truths

Writing in a letter dated March 1917, the playwright and art critic Guillaume Apollinaire attempted to capture the essence of a new ballet by Erik Satie and Jean Cocteau. “All things considered”, Apollinaire said of the production of Parade, in which performers pranced around in bizarre, boxy costumes designed by the pioneering Cubist painter Pablo Picasso, “I think in fact it is better to adopt surrealism than supernaturalism, which I first used.”

Apollinaire would promote his minting of the word ‘surrealism’ (by which he hoped to capture the ballet’s ‘visionary’ quality) by enshrining it in the programme notes, which he was invited to write. Now floating in the air of avant-garde Paris, the term was eventually picked up by artists (such as Salvador Dalí and René Magritte) fascinated by the power of the unconscious mind to produce images, symbols, and statements that supersede the realities of ordinary reason and experience. Rather than a derogatory synonym for ‘preposterous’, ‘surreal’ was intended to signify our secret access to universal truths. 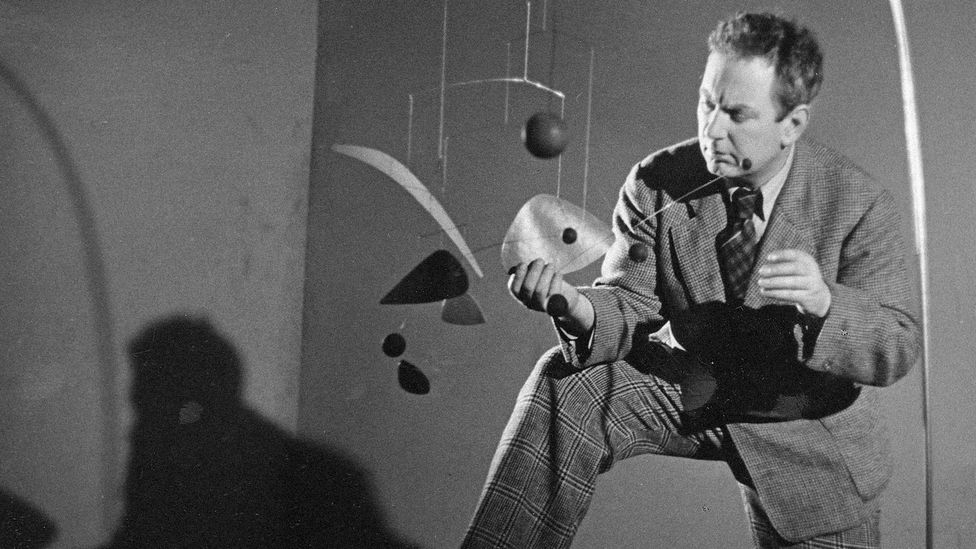 Few words are as mobile in their meaning as ‘mobile’. Handy shorthand today for ‘mobile telephone’, the word was also an abbreviation in the 17th Century for the insulting phrase ‘mobile vulgus’, used condescendingly to describe the hoi polloi. Eventually ‘mobile’, as a stand-in for riffraff and rabble, was compressed further still to the slur we still use today: ‘mob’.

In 1931, the US sculptor Alexander Calder and the French avant-garde pioneer Marcel Duchamp added another twist to the word’s meaning. Not knowing what to call his new kinetic works, comprised of abstract shapes bobbing with perfect balance from string and wires, Calder asked Duchamp for his advice. Duchamp, who’d already shocked the world 14 years earlier by declaring a urinal a work of art, did what Duchamp did best, and re-appropriated a readymade construction by giving it a new spin. Voila: ‘mobile’. 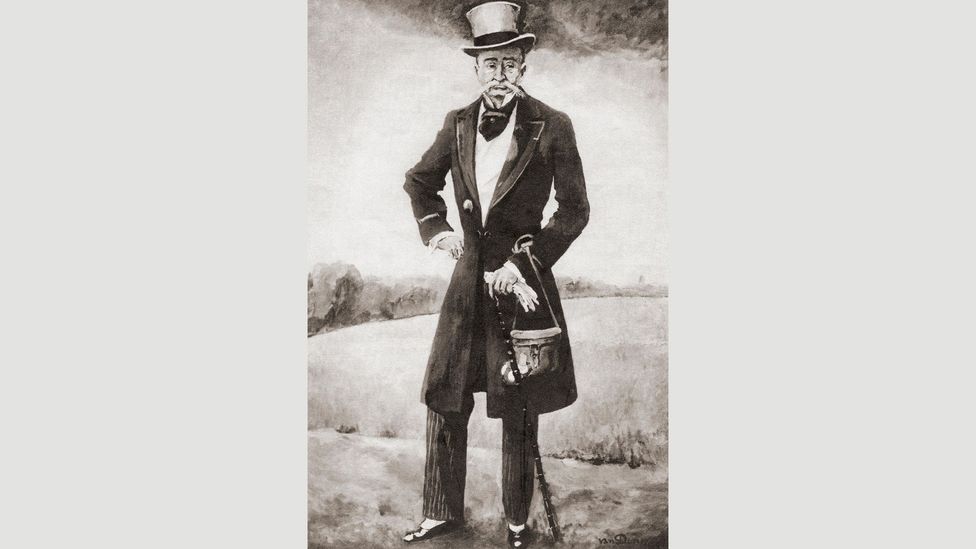 The word ‘dude’ originally applied to American dandies – such as Evander Berry Wall, pictured – in the 19th Century (Credit: Alamy)

Before there was ‘bro’, there was ‘dude’: that informal address that slaps you on the back with one hand, gives you a White Russian with the other, and says, ‘hey, I woke up at noon too, man’. For the past 20 years, Jeff Bridge’s portrayal of The Dude in the Coen Brothers’ film The Big Lebowski (1998) has epitomised the seductive spirit of dudeness. Dishevelled, stoned and disorientated, The Dude’s laid-back attitude is difficult to square with the artsy origin of the word itself, which seems to have entered popular discourse in the early 1880s as shorthand for foppishly turned-out male followers of the Aesthetic Movement – a short-lived artistic vogue that championed superficial fashion and decadent beauty (‘art for art’s sake’) and was associated with ostentatiously-attired artists such as James McNeill Whistler and Dante Gabriel Rossetti.

It’s thought that ‘dude’ is an abbreviation of ‘Doodle’ in ‘Yankee Doodle’, and probably refers to the new-fangled ‘dandy’ that the song describes. Originally sung in the late 18th Century by British soldiers keen to lampoon the American colonists with whom they were at war, the ditty, by the end of the 19th Century, had been embraced in the US as a patriotic anthem.

By then, an indigenous species of fastidiously over-styled popinjays had emerged in America to rival the British dandy, and it is to this new breed of primly dressed aesthetes that the term ‘dude’ was attached. Over time, the silk cravats and tapered trousers, varnished shoes and stripy vests worn by such proponents of the trend as Evander Berry Wall (the New York City socialite who was dubbed ‘King of the Dudes’) would be stripped away, leaving little more than a countercultural attitude to define what it means to be a Dude (or an El Duderino, if you’re not into the whole brevity thing).